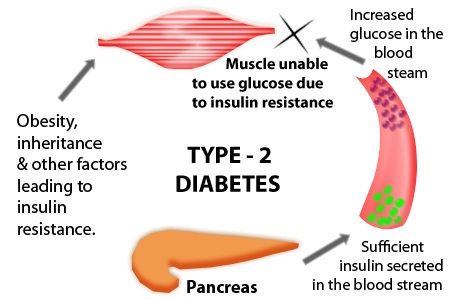 What Is Type 2 Diabetes?

Type 2 diabetes is a long term metabolic disorder. It affects the way glucose is metabolized by the body. In most cases, it is characterized by resistance of the body against effects of insulin.
It is marked by high blood pressure and relative lack of insulin, in contrast to absolute lack of insulin in type 1 diabetes.
It primarily occurs due to obesity and lack of exercise in those who are genetically predisposed. Most cases of diabetes are type 2 in nature.

Various complications may stem from Type 2 diabetes. These may include:

Type 2 diabetes can be prevented in some cases by staying within the normal weight as measured by BMI.
Over the years, number of people diagnosed with type 2 diabetes has increased steadily. It generally begins in older age and therefore is also referred to as adult onset diabetes. There is no known cure against type 2 diabetes, although it can be effectively managed.

The development of type 2 diabetes is caused by a combination of lifestyle and genetic factors. Such factors encompass:

Type 2 diabetes can be treated in the following ways: