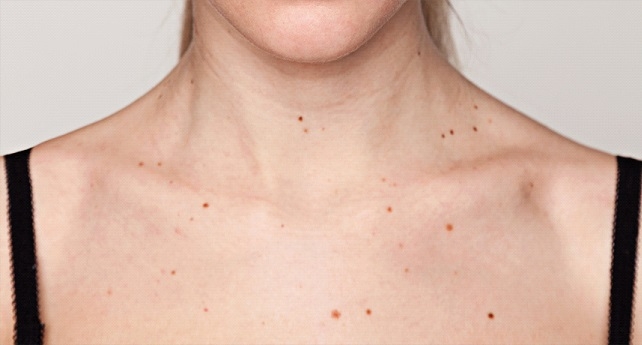 These are the form of growth that occurs as the tiny, brown spots on the skin. Moles are formed by the clusters of pigmented cells. Usually, these are common in adolescence and childhood years, where few tend to disappear in the later years of life. Generally, moles cause no harm, though at times, they get cancerous. It is important to monitor these moles, for detecting the possibility of skin cancer as the mere complication; moles may lead to is melanoma, a malignant tumor that is linked with skin cancer.
Besides, in the medical field, moles are known as nevi.

What Are The Symptoms Of Moles ?

Normally, a mole is marked by a tiny, brown color spot. Though, it may vary in terms of sizes, shapes and colors. These moles can form on any part of body’s skin, including the armpits, scalp, between the toes and fingers. At times, they also develop under the nails. Most individuals tend to have 12-40 moles. More often, these develop prior reaching the age of forty. In addition, the appearance of mole can change with the passage of time, where few may fade or even disappear as you age. Besides, hormonal changes that occur during adolescence or pregnancy can make the existing moles larger and darker.

When Is The Right Time To Get The Moles Medically Evaluated ?

It is advice to seek medical assistance in case the mole itches, causes pain or bleed.

More specifically, moles are triggered when skin cells called; named melanocytes tend to grow in masses or clusters. In the general course of action, melanocytes spread out all through our skin and make melanin. Melanin is a pigment responsible for giving our eyes, skin and hair its color.

Do Moles Lead To Any Complication ?

As mentioned earlier, moles are generally harmless, and rarely lead to any problem. Though, for some, these moles are the initial symptoms of melanoma. The malignant tumor develops with the skin cells responsible for making melanin. Individuals, those with unusual moles or are born with the large moles are more prone to develop melanoma. Besides, a family history of the disease, whilst developing more than 45-50 moles puts you at an increased risk of contracting melanoma.

How Is Moles Diagnosis ?

Simply by examining the skin, your doctor can detect moles. Though, in case, he doubts the mole of being cancerous, then he or she can suggest skin biopsy for the verification.

How Is Moles Treatment ?

The treatment is not necessarily needed, since moles are not dangerous. Whilst, many of these fade or disappear as you age. Though, in case of cosmetic concerns, you can get the moles removed. Discuss with your doctor for the options of removal. Though, in case, the doctor confirms the mole of being cancerous, then he or she will perform surgical procedures for treating it.

It is advice to limit your sun exposure and avoid tanning beds.

Expecting And You Think You Can Eat Anything And Everything? No!

Expecting And You Think You Can Eat Anything And Everything? No!