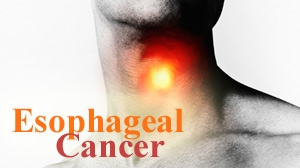 What Is Esophageal Cancer?

Esophageal cancer is a cancer arising from the esophagus—the food pipe that runs between the throat and the stomach. Although it can occur anywhere along the esophagus, it commonly occurs in the lower portion of the esophagus.
The two sub-types of this cancer are esophagus squamous-cell carcinoma and esophageal adenocarcinoma. The former is more common in developing countries while the latter is common in developed countries.
Squamous-cell carcinoma arises from the epithelial cells that line the esophagus. In contrast, adenocarcinoma arises from glandular cells present in the lower third of the esophagus, often where they have already transformed to intestinal cell type (a condition known as Barrett’s esophagus).
The disease is diagnosed by biopsy done by an endoscope. Prevention includes stopping smoking and eating a healthy diet.
Treatment is based on the cancer’s stage and location, together with the person’s general condition and individual preferences. In the presence of extensive disease or if the affected person is not fit enough to undergo surgery, palliative care is often recommended.
Outcomes are related to the extent of the disease and other medical conditions, but generally tend to be fairly poor, as diagnosis is often late. Five-year survival rates are around 13% to 18%.

The definite cause of esophageal cancer is not fully understood.
It occurs after genetic mutations in cells of esophagus. This causes the cells to divide uncontrollably. The accumulating cells then form a tumor which may spread.

The most common cause of the squamous-cell type of esophageal cancer is:

The most common cause of adenocarcinoma type is:

Moreover, the following factors are likely to increase the risk of developing esophageal cancer:

Esophageal does not exhibit symptoms until it has reached an advance stage. This is why it does not have a high survival rate.

Possible symptoms may include:

The following procedure in conducted in order to diagnose esophageal cancer:

Alkaline Diet Helping In Cancer and Other Syndromes