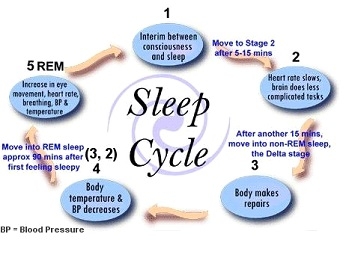 What Is Rapid Eye Movement Sleep ?

REM, known as Rapid eye movement sleep is the stage of sleep that people experience mostly during night. It is identified by random and rapid eyes movements and muscles paralysis.
During this stage of sleep, several neurons in the brain stem, usually known as sleep cells, become active. These cells are responsible to trigger this sleep phase.

Once this phase is triggered and in a REM state, the body stops the release of neurotransmitters which are known as monoamines. These neurotransmitters are responsible for the stimulation of the motor neurons. If monoamines not release, than the muscles will stop moving, leading to temporary paralysis state.

What Are The Symptoms Of Rapid Eye Movement Sleeps ?

The main symptom of REM disorder is dream-making behaviours; occasionally it is violent, progressing to injury.

Usually, such behaviours are not directed as well as may consist of leaping, kicking, punching, or jumping while sleeping.

The sufferer may wake up suddenly during this sleep attack and intensely try to recall the dream.

What Are The Causes Of REM Sleep Disorder ?

Unfortunately, the main cause of REM sleep disorder is not known yet, Even though this disorder seems to be associated with several degenerative neurological conditions for example: atrophy, Parkinson disease, diffuse dementia, as well as Shy-Drager syndrome.

Majorly, in patients, the cause is not known, and in few people, this disorder occur due to the alcohol withdrawal, TCAs use ( for example: imipramine), or the use of SRIs ( for example: orparoxetine, sertraline, fluoxetine)or several other antidepressants ( llike mirtazapine)

A person suffering from REM disorder must visit doctor. Doctor will go for certain tests for examination, such as:

Your doctor may also ask you to have a night stay so that he can study your sleep. In such case, a laboratory is designed having monitor to check heart rate, breathing and brain wave. Such monitors are used to monitor your sleep stages, your movement or behavior during the night, and the presence of other disorders which can affect your sleep schedule.

Certain medications are available to treat this successfully for example: Klonopin (Clonazepam) is one of the most often used medicines. It is advisable to consult a physician to find out which drug therapy will treat or work properly for you.

It is very important to take other mentioned precautions to care for yourself as well as your partner:

Looking For Healthy Hair? Add Iron To Your Diet…Read To Find How Iron & Hair Health Are Linked?