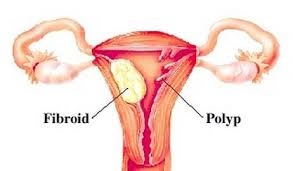 What Are Uterine Polyps?

Uterine polyps, or endometrial polyps, are growths that occur in the endometrium, the inner lining of the uterus (the organ in which a fetus grows).

These polyps are usually noncancerous (benign), although some can be cancerous or can eventually turn into cancer (precancerous polyps).

Definitive cause for uterine polyps is yet unknown, but they appear to be affected by hormone levels and grow in response to circulating estrogen.

Some common risk factors which may cause uterine polyps may include:

Uterine polyps are generally marked by the following symptoms:

Doctors tend to perform the following test in order to diagnose uterine polyps:

If uterine polyps do not cause any symptoms, treatment is not deemed necessary.

However, in the presence of symptoms, it is necessary to treat it through either of the following measures:

Drugs that help regulate the hormonal balance, such as progestins or gonadotropin-releasing hormone agonists, may be used as a temporary treatment. These medications help to relieve symptoms. However, the symptoms will usually return after the medications are stopped.

In treatment, the doctor will insert surgical instruments through the hysteroscope to remove any polyps that are found.

While using the hysteroscope to look at the interior of the uterus, the doctor uses a curette to scrape the lining and remove any polyps. The polyps may be sent to a laboratory to determine whether they are benign or cancerous. This technique is effective for smaller polyps.

This may be necessary if a polyp cannot be removed using other methods, or if the polyps are cancerous. A hysterectomy, a surgical procedure in which the entire uterus is removed, may be necessary in cases where cancer cells are found in the uterine polyps.