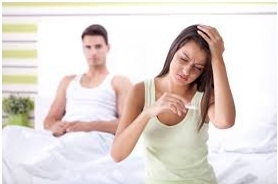 Infertility refers to an inability to conceive after having regular unprotected sex.

Infertility can also refer to the biological inability of an individual to contribute to conception, or to a female who cannot carry a pregnancy to full term.

There are many effective treatments for overcoming infertility. These treatments significantly improve the chances of becoming pregnant.

The reasons for infertility can involve one or both partners.

Causes of male infertility may include the following:

The following factors increase the risk of developing infertility:

Infertility symptoms in women include the following:

Infertility symptoms in men include:

In order to diagnose infertility, the following tests are conducted:

Treatment of infertility depends upon the underlying cause, age and as to how long one has been infertile.

Possible treatments for men include:

Possible treatments for women include:

Fertility drugs are the main treatment for women who are infertile due to ovulation disorders. These medications regulate or induce ovulation.

During IUI, healthy sperm that have been collected and concentrated are placed directly in the uterus around the time the woman’s ovary releases one or more eggs to be fertilized

Uterine problems such as endometrial polyps, a uterine septum or intrauterine scar tissue can be treated with hysteroscopic surgery.

What’s In Style For Summer 2016 In Pakistan?