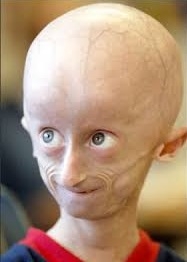 Progeria, or Hutchinson-Gilford syndrome, is an extremely rare and progressive genetic disorder marked by rapid aging of children, a phenomenon which starts in the first two years of their lives.

Although such children may appear perfectly normal at birth, they may start to exhibit signs and symptoms during early on which may include slow growth and hair loss

While 13 years is the average life expectancy, People with Progeria can go on and live for 20 years or longer as well.

While there is no known cure for Progeria, research is still ongoing in this domain.

As a result of the ongoing research, researchers have been able to find a gene mutation which they believe is responsible for Progeria.

The gene, known as Lamin A, is responsible for making a protein which is dubbed to be integral in holding the nucleus of the cell together. People who have the mutated gene have unstable cells which then lead to the aging process, which is a major characteristic of Progeria.

It is not inherited as none of the parents in the cases known had been carries. According to research, the genetic mutation tends to affect a single sperm or egg just before conception.

Progeria can simply be diagnosed by observing the signs and symptoms during the physical examination. In order to confirm suspicion, a genetic testing may be performed

While there is no cure of Progeria, certain treatment may help in slowing down the process of aging: