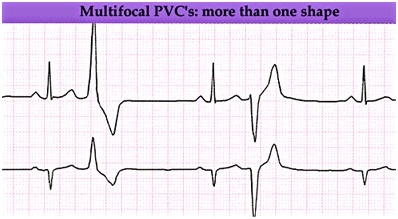 What Is Premature Ventricular Contractions PVC ?

The most common cause of irregular heart rhythms, premature ventricular contraction (PVC) is an early heartbeat that originates in the ventricles and causes disruption of normal heart rhythms.

Such a heartbeat is initiated by the purkinje fibers rather than the sinoatrial node (the normal heartbeat initiator) in the ventricles.

The affected pattern of heartbeats is characterized by a normal beat, an extra beat (the PVC), a slight pause, and then a stronger-than-normal beat.

The reason for a stringer beat is due to the fact that the heart fills with more blood during the pause following the PVC, giving the next beat extra force. Such a pattern may occur randomly or at definite intervals.

Also known as premature ventricular complex, ventricular premature beat, or ventricular extrasystole, PVC can be detected via an ECG and may require treatment in case of frequent occurrences of irregularity in heartbeats.

PVC can be caused by a number of factors, which may include:

Although PVC can occur to anyone, elderly and men are more prone to it than others.

The following signs and symptoms are exhibited by those who develop PVC:

ECG is the only way of diagnosing PVC. It helps in detecting the extra beats, identifying the pattern and in looking for underlying heart disease.

The following tests are included in ECG: