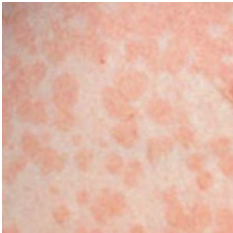 What Is Tinea Versicolor?

Tine vesicolor, is a common condition that causes small patches of skin to become scaly and discolored. The patches may be darker or lighter than your normal skin color, or may be red or pink. They tend to develop gradually and may join up to form larger patches over time. The area’s most often affected by tinea versicolor include the trunk (chest and tummy), neck, upper arms and back.

Although it may look unpleasant and the patches are sometimes itchy, tinea versicolor is harmless.

The yeast that causes tinea versicolor lives on everyone’s skin. It is not clear why the yeast overgrows on some people’s skin and not others.

We do know the following about tinea versicolor:

The fungus that causes tinea versicolor can be found on healthy skin. It only starts causing problems when the fungus overgrows. A number of factors may trigger this growth, including:

Tinea versicolor that develops in people with dark skin may result in the loss of skin color, known as hypopigmentation. For some people, the skin may darken instead of lighten. This condition is known as hyperpigmentation. Some individuals who develop tinea versicolor don’t have any significant changes in their skin color or appearance. In addition to changes in the color of your skin, you may also experience itchy skin.

Your doctor can diagnose tinea vesicolor by looking at it. If a diagnosis can’t be made by looking at the skin then following test can be done:

If your symptoms aren’t severe, you may choose to treat your condition at home. OTC antifungal creams or shampoos may be effective for

killing the infection. Examples of OTC medications that can be used to treat tinea vesicolor include:

If you seek medical attention for tinea versicolor, your doctor may prescribe different medications, such as topical creams that can be applied directly to the skin. Examples include:

Your doctor may also prescribe pills to treat tinea versicolor, including: