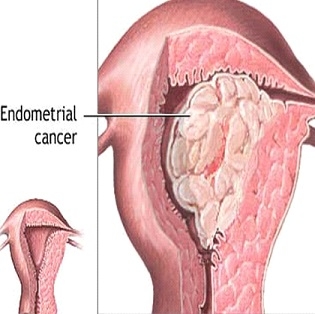 What Is Endometrial Cancer?

Normally, endometrial cancer is diagnosed in its initial stage. The reason behind this is that the disease causes abnormal vaginal bleeding. Indeed, this makes the woman see her doctor at the earliest. Early detection can help in curing endometrial cancer, by surgically removing the uterus.

What Are The Symptoms Of Endometrial Cancer?

In case of observing any distressing symptoms, for example pain during the sexual intercourse, pelvic pain and vaginal discharge or bleeding that is not due to the menstrual periods, do not delay to seek medical aid.

Researchers have failed to identify the actual cause behind the disease. The factor that is known is that for unknown reasons, the cells present in the uterus’s lining develop genetic mutations. These cause healthy cells to turn abnormal. The abnormal cells then grow and reproduce at a fast pace, and do not expire at the expected time.

These then gather and form a tumor. In addition to this, cancer cells manage to invade the surrounding tissues, spreading and affecting the other organs of the body as well.

What Are The Risk Factors Of Endometrial Cancer?

A number of factors are known to increase the possibility of endometrial cancer, these are:

What Are The Complications Of Endometrial Cancer?

As mentioned earlier, the cancerous cells can spread to the other parts of the body. This makes the disease difficult to cure. Lungs are the common ones to be affected in case, the disease spreads.

How Is Endometrial Cancer Diagnosed?

Once the cancer is detected, the doctor will then take steps to identify the stage, patient is suffering from. This will help him or her prepare a suitable treatment plan for the patient.

How Is Endometrial Cancer Treated?

As mentioned earlier, if endometrial cancer is detected at an initial stage, then chances of cure increase. Few treatment options are as follow:

To prevent it, maintain healthy weight and exercise for at least 20 minutes a day.