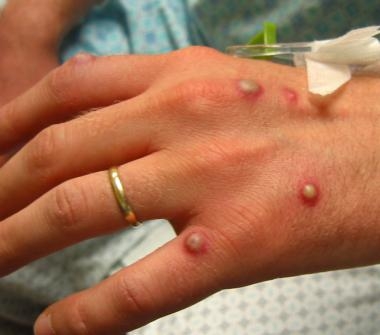 What is Monkey Pox?

However, African rodent species are expected to play a role in transmission. Smallpox  and monkey pox are so closely related, studies have suggested that people vaccinated against smallpox have about an 85% chance of being protected from monkey pox.

The illness begins with:

Within 1 to 3 days (sometimes longer) after the appearance of fever, the patient develops a rash, often beginning on the face then spreading to other parts of the body.
Lesions progress through the following stages before falling off:

The diagnosis of Monkey Pox is often made presumptively in Africa by the patient’s history and the exam that shows the pox lesions, however, a definitive diagnosis is made by PCR, ELISA, or Western blotting tests that are usually done by the CDC or some state labs. Definitive diagnosis is important to rule out other possible infectious agents like smallpox.

Following are the treatment for Monkey Pox:

For severe symptoms, supportive measures such as mechanical ventilation may rarely be needed.