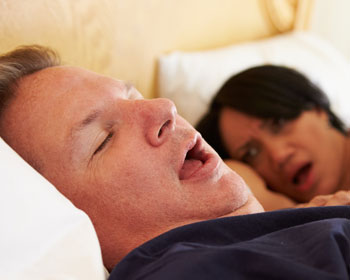 What Is Sleep Apnea?

Sleep apnea is a sleep disorder marked by pauses in breathing (apnea) or occurrences of shallow or infrequent breathing (hyopnea) during sleep.

Each apnea can range from several seconds to several minutes and may occur up to five times an hour.

There are three types of sleep apnea:

There are different risk factors depending upon the type of sleep apnea.

People with thicker necks may have narrower airways and hence are more prone to sleep apnea.

Tonsils or adenoids may become enlarged and block the airway, particularly in children with sleep apnea.

Men are twice as likely to have sleep apnea as women.

Having family members who suffer from sleep apnea increases the likelihood of getting sleep apnea.

These substances relax the muscles in your throat.

Smoking may increase the amount of inflammation and fluid retention in the upper airway leading to sleep apnea.

People, who have difficulty breathing through their noses, are more likely to develop sleep apnea.

Middle-aged and older people have a higher risk of central sleep apnea.

People who’ve had a stroke are more at risk of central sleep apnea.

Common symptoms of sleep apnea include the following:

The doctor may perform the following tests and evaluations in order to confirm the diagnosis of sleep apnea:

Overall, treatment for sleep apnea can be broadly categorized into two types: