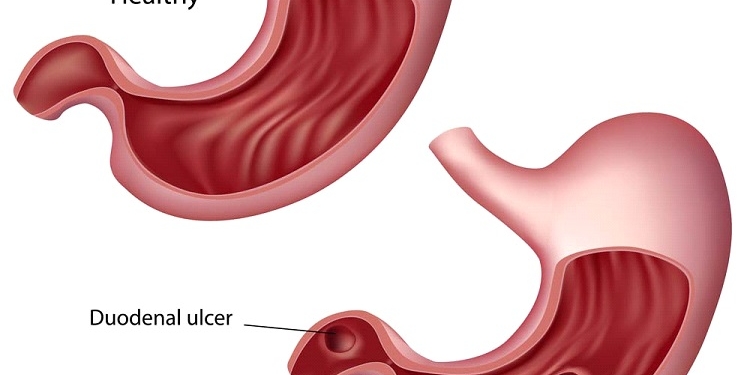 What Is Peptic Ulcer?

The medical condition is marked by open sores, which are known to occur on the:

Abdominal pain is the common indication of peptic ulcer. In addition to this, the condition includes the following:

People believe a demanding job or spicy foods to be the common triggers of peptic ulcers. Though, doctors do not agree with the myth. According to them, certain medications and a bacterial infection are the actual causes of most of its cases.

What Are The Symptoms Of Peptic Ulcer?

The common sign of the condition is burning pain. It is sourced by the ulcer, whilst aggravated when the ulcerated area comes in contact with the stomach acid.  Generally, the pain can:

In case the symptoms are distressing, then it is time to seek medical aid. Gnawing pain can be temporarily relived with acid blockers. If the pain continues, consult the health care provider.

Peptic ulcer can be triggered by a number of reasons, these are as follow:

What Are The Risk Factors Of Peptic Ulcer?

Several factors known to raise your chances of peptic ulcer are as follow:

What Are The Complications Of Peptic Ulcer?

In case, the condition is left untreated, than the chances of the following complications tend to rise:

How Is Peptic Ulcer Diagnosed?

The doctor will conduct a thorough physical examination and will need details regarding your medical history and symptoms. to detect peptic ulcer, he or she would possibly suggest diagnostic tests for example:

How Is Peptic Ulcer Treated?

As mentioned earlier, its treatment relies upon the cause. For example, if it is caused by bacterium, then the doctor will prescribe antibiotics to counter it.

Moreover, the doctor will also suggest drugs to block or reduce the production of acid, as well as to pace healing.