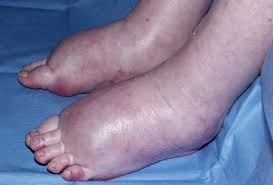 Oedema is a build-up of fluid in the body which causes the affected tissue to become swollen.
The swelling can occur in one particular part of the body or may be more general, depending on the cause.
Fluid can accumulate under the skin most commonly causing swelling of the lower legs and ankles or in one of the body’s internal organs, such as the lungs.

Some of the many common Causes of Oedema include:

Symptoms will mainly depend on the underlying cause. The following refer to generalized oedema:

The primary care physician will investigate what the underlying cause of the oedema is. The patient will be asked questions about his/her:

The physician will also carry out a physical exam. If there are indications that there may be an underlying medical condition causing the oedema, the doctor may order some tests. These may include:

Oedema is often temporary and clears up by itself. For example, if you’ve been standing up for too long on a hot day, your ankles may swell up until you get the chance to put your feet up and rest.
If oedema doesn’t go away by itself, see your GP. They’ll try and find out if there’s an underlying cause which needs to be treated. This could involve taking medication or following some advice, such as:

If an underlying condition is causing the fluid imbalance, it should clear up after the condition has been diagnosed and treated.