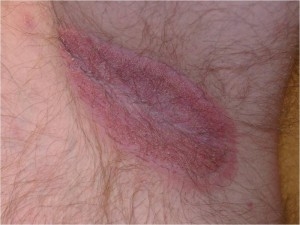 What Is Jock Itch?

Jock itch is a fungal infection in which the groin and skin of genitals gets red or pick rashes and starts to itch. The literal meaning of the word jock is a stereotype of an athlete. The name itself indicates that this infection is more common in athletes than anyone else. The jock itch usually appears on the warm and moist areas of the body. Sweating is the most common factor that develops the fungus and could be transferred if other people use the same towel or cloth used by the victim.

What Are The Symptoms Of Jock Itch?

There is only one most prominent symptom of jock itch i.e. a red or pinkish rash that usually starts from the groin and extends upto the upper thigh. Some other factors that may indicate jock itch includes:

Since jock itch is easily detectable, victims must consult a doctor immediately after the symptoms evolve to avoid any possible complications.

Jock itch may be caused due to the following reasons:

In many cases, jock itch can be transferred to people by using the same towel or cloth used by the victim.

What Are The Risk Factors Of Jock Itch?

The fungus that causes jock itch dwells in moist and warm environment. The risk of jock itch increases if a person:

How Is Jock Itch Diagnosed?

Diagnosing jock itch is quite a simple task for doctors. In most cases, doctors recognize jock itch immediately by just looking at it. Additionally, doctors may verbally ask for some information from the victims. In some cases where recognizing jock itch becomes difficult, doctors may take skin samples for a microscopic observation and even send it for a culture test.

How Is Jock Itch Treated?

Doctors recommend some over-the-counter creams, lotions and sprays for treatment of jock itch. This is because jock itch gets cured quite easily through these medicines. However, doctors also suggest that jock itch victims also suffering from athletics foot must get both treated together to eliminate the risk of getting jock itch back. If these medications fail to cure the infection, prescribed medication is then required. In some cases, however, antifungal pills are also prescribed.

How Can We Prevent Jock Itch?

It is possible to prevent jock itch from occurring if the following measures are taken: