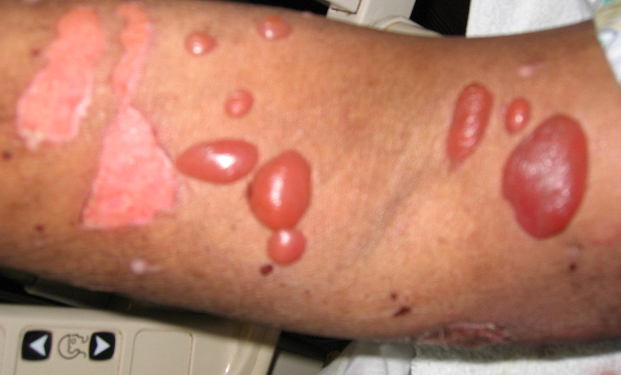 What Is Bullous Pemphigoid?

Bullous pemphigoid is characterized by large, pus-filled blisters that usually form on the skin areas that flex, for example armpits, upper thighs or lower abdomen. The rare skin condition is more common in individuals above sixty years of age. As you age, the chances of contracting bullous pemphigoid increase.

In addition to this, its treatment generally includes drugs for example corticosteroids (prednisone) that suppresses the immune system. Unfortunately, for some older adults, the condition turns out to be serious, particularly for those with poor health conditions.

What Are The Symptoms Of Bullous Pemphigoid?

Few individuals experience no symptoms at all while others have irritation, itching and redness. In intense cases, several blisters tend to emerge. These blisters are named as bullae.
Often, bullae forms on the middle of the body, arms or legs. Approximately, 30% percent of sufferers develop bullae in their mouth as well. Such can break open, forming into open sores or ulcers. Some other symptoms of bullous pemphigoid are:

Do not delay to visit your doctor in case you are an older adult, and have developed the above mentioned symptoms.

It occurs when the body’s immune system mistakenly attacks the tissue layer beneath the skin’s outer layer. What exactly grounds the immune system to react abnormally, is unknown till date, however it may result because of some other diseases, immune system disorders or taking specific medications.

Often, elderly people are more prone to contract bullous pemphigoid as compared to young adults. Its symptoms tend to emerge and resolve. In majority instances, the condition resolves within four to five years.

What Are The Complications Of Bullous Pemphigoid?

In case the ruptured blisters get infected, then, such can lead to a serious infection called sepsis. Sepsis is an acute infection that affects the entire body. However; older adults with poor health conditions are more prone to experience the complication of bullous pemphigoid.

How Is Bullous Pemphigoid Diagnosed?

Certain tests that can help diagnose bullous emphigoid are:

How Is Bullous Pemphigoid Treated?

The doctor can prescribe corticosteroids- strong anti-inflammatory drugs in order to treat the condition. For suppressing the immune system, the doctor can suggest medicines or chemotherapy.

What Is The Prognosis Of Bullous Pemphigoid?

Often, prompt and continuous treatment helps to make the condition respond well. Many people with bullous pemphigoid stop taking their medicines after their symptoms get better. However at times, the symptoms reappear after the treatment is discontinued.

What Is The Prevention Of Bullous Pemphigoid?

Unfortunately, there is nothing you can do to prevent the condition. However an individual with bullous pemphigoid must: