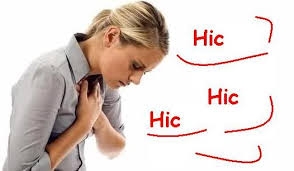 A Hiccup, known as synchronous diaphragmatic flutter (SDF) or singultus in medical terms, is an involuntary contraction (myoclonic jerk) of the diaphragm that may repeat several times per minute.

It is an involuntary action involving a reflex arc.

Once triggered, the reflex causes a strong contraction of the diaphragm followed about 0.25 seconds later by closure of the vocal cords, which results in the classic “hic” sound.

Most common causes of hiccups include:

However, if hiccups persist for more than 48 hours, it seems to be then caused by the following factors:

This can be caused by:

Surgeries and mental and emotional issues, for instance anxiety and stress, are known to increase the probability of developing hiccups.

The following tests and exams are conducted in order to check for underlying medical conditions which hiccups may be a symptom of:

Normally, hiccups can be treated via home remedies which include:

The following treatment is considered for hiccups which last for more than two days:

Online Pre-Booking On Lawn Fabric Should Stop In Pakistan!