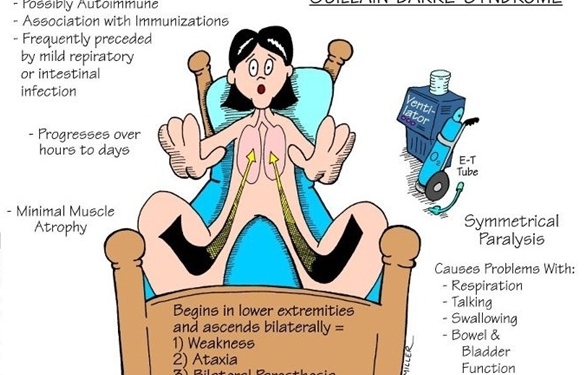 What Is Guillain Barre Syndrome?

Guillain Barre Syndrome is a rapid-onset muscle weakness as a result of damage to the peripheral nervous system.

It occurs when the body’s immune system attacks part of the nervous system.

Many experience changes in sensation or develop pain, followed by muscle weakness beginning in the feet and hands. The symptoms develop over half a day to two weeks.

It can be divided into the following types:

The exact cause of Guillain-Barre syndrome is yet unknown.

However, most people develop Guillain-Barre syndrome after having another illness.

This is usually a viral infection, such as the common cold, influenza, a throat infection, or sometimes a bacterial infection

Overall, Guillain-Barre syndrome can be triggered by:

The following signs and symptoms are exhibited by those suffering from Guillain-Barre syndrome:

The following procedures help in the diagnosis of Guillain-Barre syndrome:

A small amount of fluid is withdrawn from the spinal canal in the lower back. The fluid is tested for a type of change that commonly occurs in people who have Guillain-Barre syndrome.

Electrodes are taped to the skin above the nerves. A small shock is passed through the nerve to measure the speed of nerve signals.

There are two types of treatment available for Guillain-Barre syndrome.

The liquid portion of part of the blood (plasma) is removed and separated from your blood cells. The blood cells are then put back into the body, which manufactures more plasma to make up for what was removed. Plasmapheresis may work by ridding plasma of certain antibodies that contribute to the immune system’s attack on the peripheral nerves.

Immunoglobulin containing healthy antibodies from blood donors is given through a vein (intravenously). High doses of immunoglobulin can block the damaging antibodies that may contribute to Guillain-Barre syndrome.