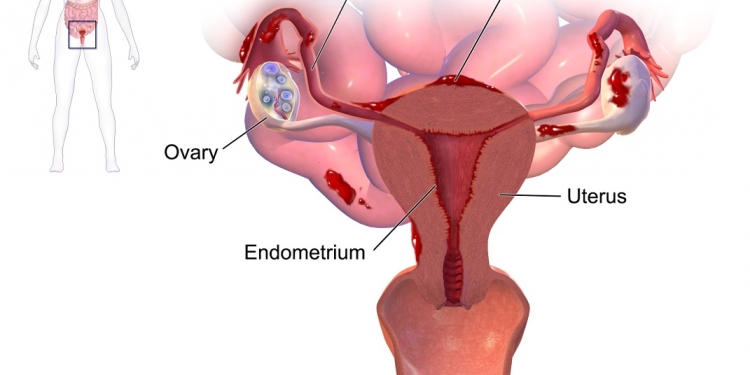 It is usually a painful disorder wherein tissue which lines inside the uterus tends to grow outside it. Mostly, the disorder involves the:

However, in rare cases, endometrial tissue reaches beyond the pelvic region. In the disorder, the displaced endometrial tissue persists to work the way it generally does, such as thickens, breaks down, plus bleeds with every menstrual period.
Since the displaced tissues find no mean to leave the body, it gets trapped. In the cases wherein ovaries are involved, formation of cysts tends to occur. Nearby tissues can get irritated, ultimately forming adhesions and scar tissue.
In addition to this, the disorder can be very painful, particularly during the menstrual period. It can also lead to problems related to fertility. Thankfully, advance treatments can help with the concern.

What Are The Symptoms Of Endometriosis ?

Pelvic pain is the key indication of endometriosis, mostly linked with the menstrual period. Even though, most females develop cramps during their periods, same is not the case with women suffering from endometriosis. They illustrate their menstrual pain as being extremely intense than usual. Few common indications of endometriosis are as follow:

Moreover, the intensity of pain is not considered a reliable sign to judge the extent of your condition. Reason lies in the fact, that few females with mild form of disorder experience intense pain, whilst, others suffering from its advanced stages can have slight to no pain at all.

At times, endometriosis is misdiagnosed with some other condition known to source pelvic pain. For example:

Even though, the precise trigger of endometriosis is yet to be known, though few factors are considered to play a role in its instigation. These are as follow:

What Are The Complications Of Endometriosis ?

The two common complications that can be lead by endometriosis are as follow:

How Is Endometriosis Diagnosis ?

In order to detect the disorder, as well as some other underlying condition that may have rooting the pelvic pain, the health care provider will ask you to detail your signs. Plus spot the location of pain, as well as the right time when the pain arises. In order to find for the evidence of endometriosis, the doctor can suggest the following tests:

How Is Endometriosis Treatment ?

Often, its treatment involves drugs or surgery. What treatment option is best for you is decided by your doctor for he or she considers the intensity of signs before deciding. Whether the patient is willing to conceive or not, is also took into account before the decision is made.