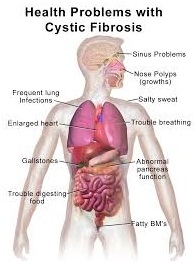 What Is Cystic Fibrosis?

It is a life threatening disease as the persistent ling infection may make it difficult for the affected individual to breath.

Inherited in an autosomal manner, it is caused by the presence of mutations in both copies of the gene for a protein. Having a single copy of the mutated gene leads an individual to become a carrier.

This protein is responsible for producing mucus, sweat and digestive juices. Having cystic fibrosis leads to these fluids to become thick and sticky thereby causing problems.

Approximately one out of every 3000 newborns is affected by cystic fibrosis and about one in 25 people are carriers.

There are over 1500 types of mutations which bring about cystic fibrosis. However, the most common one is ΔF508 (deletion of three nucleotides).

The CFTR gene is responsible for production of fluids ranging from mucous to digestive juices. When mutation occurs, CFTR tends to produce thick, sticky fluids.

In order to develop the disease, a child must inherit a copy of the mutated gene from both his mother and father. In case of having one copy, the child will be a carrier and would not develop cystic fibrosis.

The following tests are conducted in order to diagnose cystic fibrosis:

While there is no cure for cystic fibrosis, it can be managed via treatment. The following treatment options are available: