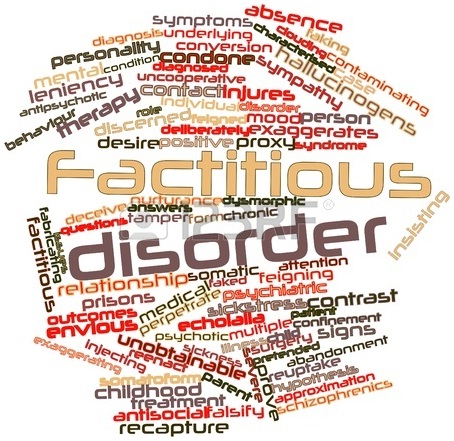 What Is Factitious Disorder?

Factitious disorder is a mental condition in which a person acts as if he/she has an illness. The affected individual deliberately produces, feigns, or exaggerates symptoms in order to come off as sick.

Such a behavior either may be exhibited at all times, or in front of a particular individual. People with this condition may produce symptoms by contaminating urine samples, taking hallucinogens, injecting themselves with fecal material to produce an abscess, and other similar behavior.

Factitious disorder symptoms vary in severity. They can range from being mild to severe. In case of severe factitious disorder the person may make up symptoms or even tamper with medical tests to convince others that treatment is needed.

Being a psychological disorder, factitious disorder is hard to treat. However, treatment is necessary to prevent self harm.

The cause of factitious disorder is not known. However, research is ongoing in this domain.

It is thought that people with this disorder may have experienced a severe illness when they were young or may have been emotionally or physically abused.

A number of factors may increase the risk of developing factitious disorder. They may include:

Signs and symptoms exhibited may include:

The following diagnostic criteria must be met for an individual to be diagnosed with factitious disorder:

There are no standard therapies directed to tackle factitious disorder. This makes treatment hard.

However, treatment is necessary to prevent an individual from inflicting self-harm.