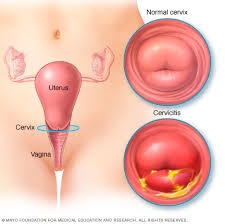 Cervicitis is the inflammation of the cervix, the lower part of the uterus which extends to the vagina. The inflammation may be due to irritation, infection or injury of cells which line the cervix.

Cervicitis in women has features which mirror those exhibited by men suffering from urethritis. If not treated promptly, it may prove to be fatal. In order to treat cervicitis, it is important to identify the root cause and treat it.

As the cervix hinders the entrance of bacteria and viruses into the uterus, Cervicitis may lead to an increased risk of infections ad HIV in women.

Cervicitis occurs mainly due to sexually transmitted infections. These infections may include:

Other things which may lead to the development of cervicitis include:

The following are more likely to develop cervicitis:

Most women suffering from cervicitis may not experience any symptoms.
In case symptoms do occur, it may include the following:

There is no standard treatment available for cervicitis. However, without treatment cervicitis can last for years and symptoms may worsen.
Available treatments depends upon determining the root cause of cervicitis and then treating it.