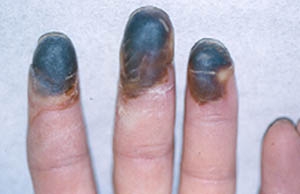 What Is Buerger’s Disease?

Buerger’s disease also known as thromboangiitis obliterans, is a rare disorder that, in most cases, affects young or middle-aged male cigarette smokers.
It is characterized by narrowing or blockage (occlusion) of the veins and arteries of the extremities, resulting in reduced blood flow to these areas (peripheral vascular disease).
The legs are affected more often than the arms. In most cases, the first symptom is extreme pain of the lower arms and legs while at rest.
Virtually everyone diagnosed with Buerger’s disease smokes cigarettes or uses other forms of tobacco, such as chewing tobacco.
Quitting all forms of tobacco is the only way to stop Buerger’s disease. For those who don’t quit, amputation of all or part of a limb may be necessary.
Buerger’s syndrome may lead to gangrene.  Signs and symptoms of gangrene include black or blue skin, a loss of feeling in the affected finger or toe, and a foul smell from the affected area. Gangrene is a serious condition that usually requires amputation of the affected finger or toe.

It isn’t clear what triggers Buerger’s disease. It’s possible that some people may have a genetic predisposition to the disease.
Buerger’s disease is caused by small blood vessels that become inflamed and swollen.

Symptoms most often affect 2 or more limbs and may include:

There are no tests which confirm Buerger’s disease.
However, different tests can rule out other more common conditions or confirm suspicion of Buerger’s disease brought on by the onset signs and symptoms.
Tests may include:

Although no treatment can cure Buerger’s disease, the most effective way to halt the disease’s progress is to quit using all tobacco products.
This can be done via medications or residential smoking cessation programs.

Although less effective, other options do exist. Options include: