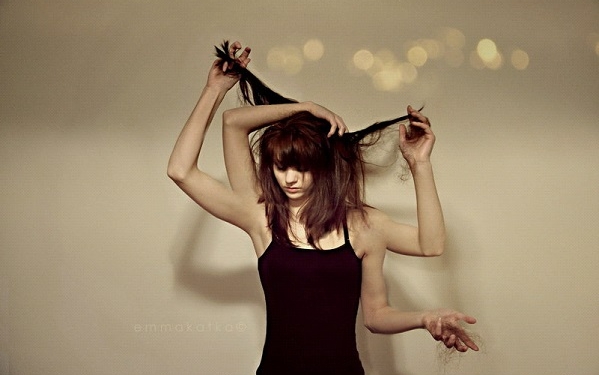 It is a disorder wherein an individual feels an uncontrollable, frequent urge to pull out his or her hair from the eyebrows, scalp or other parts of the body. The urge tends to be irresistible.
Pulling out hair from the scalp can result in patchy bald spots, affecting your overall appearance. Individuals with the disorder try hard enough to cover their hair loss. In addition to this, the disorder can be mild for some, and is mostly manageable, however for rests, the obsessive urge of pulling out hair is overpowering. Certain treatments can help stop the occurrence of hair pulling, or at least limit it.

What Are The Symptoms Of Trichotillomania ?

An individual with trichotillomania can also pull hair from the dolls or even pets. Majority of them tend to pull out their hair privately, so that people remain unaware about their disorder.

Unfortunately, the precise cause of the disorder is yet to be known. Though, like the other complex disorders, it is considered that trichotillomania occurs due to a mixture of environmental and inherited factors. In addition to this, abnormalities in dopamine and serotonin, the natural chemicals of our brain, can also contribute in its instigation.

What Are The Complications Of Trichotillomania ?

Even though, the urge to pull out hair may not sound a problem, though, it does tend to impact your life. A number of complications associated with trichotillomania are as follow:

In case an individual with trichotillomania develops the habit of eating the pulled-out hair, then he or she may form hairballs in the digestive tract.

How Is Trichotillomania Diagnosis ?

The doctor will conduct a detailed examination to ascertain the patient has trichotillomania. During

which, the doctor will:

Possibly, the doctor will conduct a biopsy in order to rule out other potential causes of hair loss, for example scalp infection.

How Is Trichotillomania Treatment ?

Research on its treatment tends to be limited. Though, a number of treatment options can help you stop the pulling of hair, or at least limit the occurrence. These include: