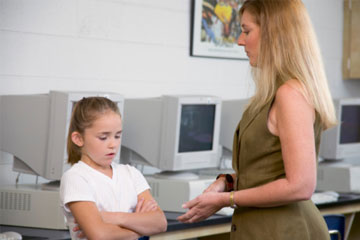 What is Oppositional Defiant Disorder?

Oppositional defiant disorder (ODD) is defined by the DSM-5 as “a pattern of angry/irritable mood, argumentative/defiant behavior, or vindictiveness lasting at least six months as evidenced by at least four symptoms from any of the [defined] categories and exhibited during interaction with at least one individual who is not a sibling”.

Many children and teens with ODD also have other behavioral problems, such as:

There is no known cause for the development of Oppositional Defiant Disorder.

However, a combination of the following factors may play an integral role:

The following symptoms may be exhibited by those suffering from ODD:

Diagnosis involves detailed interviews with the child (if they are old enough), parents and teachers, and comparing the child’s behavior with the checklist for Oppositional Defiant Disorder contained in the Diagnostic and Statistical Manual of

For a child or adolescent to qualify for a diagnosis of ODD:

Oppositional Defiant Disorder can be treated in the following ways: