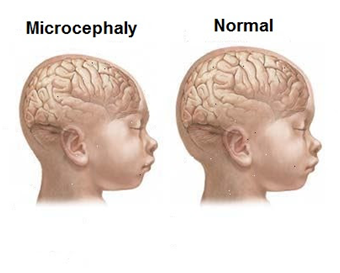 Microcephaly is a rare condition whose causes can be genetic or environmental (related to toxicity, radiation or infection). It is defined as a condition at birth in which the newborn’s head circumference is less than expected for age and sex. Microcephaly can be caused by a variety of genetic and environmental factors. Children with microcephaly often have developmental issues. Generally there’s no treatment for microcephaly, but early intervention with supportive therapies, such as speech and occupational therapies, may help enhance your child’s development and improve quality of life.

Microcephaly is often congenital, meaning it is already present at birth. In other cases, a baby may be born with an evidently normal head size, and doesn’t begin showing signs until his first few weeks or even first few months of life.

Defects in these genes can interfere with the brain’s maturation and growth.

Causes of microcephaly with onset during infancy include:

The main symptom  of microcephaly is a head size that is much smaller than normal for the child’s age and sex. Other symptoms can vary far apart from child to child. They might include:

Not every child with microcephaly will display observable symptoms beyond a small head size. Some children have normal intelligence and can do everything their peers can. However, many children with the condition experience:

If the brain stem is affected, problems could be more dangerous, because the brain stem controls chief functions such as breathing. In addition, sometimes microcephaly is followed by other medical problems such as:

Early diagnosis of microcephaly can sometimes be made by :

Ultrasounds have the best diagnosis possibility if they are made at the end of the second trimester, around 28 weeks, or in the third trimester of pregnancy. Often diagnosis is made at birth or at a later stage.
Suspected cases should be reviewed by a pediatrician, have brain

There is no particular treatment for microcephaly. A multidisciplinary team is important to assess and care for babies and children with microcephaly. Early intervention with stimulation and play programs may show positive results on development. Family counseling and support for parents is also immensely important.