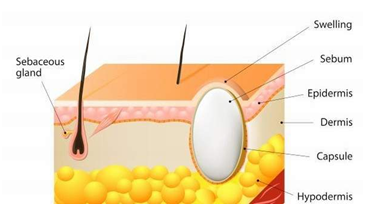 What is  Sebaceous Cyst?

Sebaceous cysts are common noncancerous growth of the skin. Cysts are anomalies in the body that may contain liquid or semi liquid material. These cysts are closed sacs that can be found under the skin of the whole body, except for the palms of the hands and soles of the feet. A cyst usually is a slow-growing lump that can move easily under the skin. A foul odor may be seen from the overlying skin. Basically the term alludes to either an “epidermis cyst,” which originates from the skin, or a “pillar cyst,” which comes from hair follicles.

Sebaceous cysts form out of your sebaceous gland. The sebaceous gland produces the oil called sebum that coats your hair and skin. Cysts can develop if the gland or its duct, the passage where oil is able to leave, becomes damaged or blocked. This usually occurs due to a trauma to the area. The trauma may be a scratch, a surgical wound, or a skin condition, such as acne. Sebaceous cysts grow slowly, so the trauma may have occurred months or weeks before the cyst visible. Therefore, blocked glands or swollen hair follicles in the skin may be the cause.

Trauma to skin has been the cause, as well. Cysts sometimes are hereditary.

Other causes of a sebaceous cyst may include:

The primary symptom of a sebaceous cyst is a small lump under the skin. The lump usually is not painful. In some cases, however, cysts can get inflamed and become painful to the touch. There may be redness and increased temperature of the skin on the area of the cyst. Drainage from the cyst will appear grayish-white and cheese-like and have a foul odor.

A sebaceous cyst is considered abnormal and possibly cancerous, if it has the following characteristics:

Cyst can be diagnosed with a simple examination of the skin. Common tests used for a sebaceous cyst include:

Cyst can be leave alone if it doesn’t cause discomfort or cosmetic problems. Following are the treatment options available: