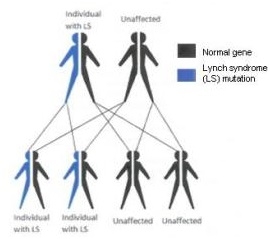 What Is Lynch Syndrome?

An autosomal dominant condition is a relationship of alleles of one gene, where one allele masks the contribution of the second allele.

Lynch syndrome is known to increase the risk of developing colon cancer and is dubbed to be a type of cancer syndrome.

A cancer syndrome is a genetic disorder in which inherited genetic mutations in one or more genes predispose the affected individuals to the development of cancers and may also increase the risk of early onset of these cancers.

The increased risk of these cancer is associated with the inherited mutation which is the underlying cause of lynch syndrome.

Lynch syndrome is a hereditary disease i.e. it runs in families in an autosomal dominant inheritance pattern.

Lynch syndrome causes cancer since the genetic mutation which is acquired as result of lynch syndrome tends to cause mismatch repair genes.

People with the mutated gene tend to lack the ability to repair minor mistakes in the cells. These mistakes may accumulate to cause cell damage which in turn may result in the cells becoming cancerous.

People with lynch syndrome may exhibit the following symptoms:

Lynch syndrome can be diagnosed via: