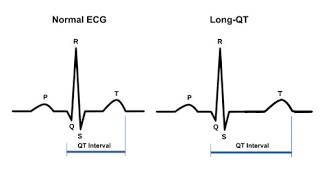 What Is Long QT Syndrome ?

Long QT syndrome is a rare inherited heart condition in which a delay in change in membrane potential, following a heartbeat, in the heart might increase the risk of episodes of irregular heart beat which may generate from the ventricles.

As a result, long QT syndrome is known to cause symptoms ranging from fainting spells to palpitations. Long QT syndrome can be dangerous and may prove to be fatal.

Causes of long QT syndrome may include medications, medical conditions and a possible genetic mutation.

There are treatment options available which help combating against the syndrome. While at times, certain medications may be prescribed, possible management options may primarily include avoiding certain activities which are known to trigger the syndrome.

In long Qt syndrome, the heart takes a larger amount of time in recharging (repolarizing) between beats. This electrical disturbance is dubbed to be prolonged QT interval. The symptoms which occur as a result are collectively known as Long QT syndrome.

Possible causes may include:

People with low potassium levels in their body and those who have first degree relatives suffering from similar disease tend to have a higher probability of developing Long QT syndrome.

Some people may not develop any symptoms. However, in case symptoms do occur, they consist of:

Diagnostic tests may include the following: