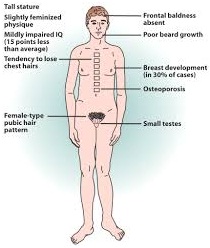 What Is Klinefelter Syndrome?

Klinefelter syndrome is a genetic condition characterized by set of symptoms that result from two or more X chromosome in males.

Klinefelter syndrome adversely affects testicular growth, and this can result in smaller than normal testicles. This can lead to lower production of the sex hormone testosterone

Klinefelter syndrome occurs as a result of a random error that causes a male to be born with an extra sex chromosome.

An older mother is at a higher risk f giving birth to a baby boy with Klinefelter syndrome.

In boys and teenagers:

After conducting a physical examination, the following tests may be done in order to diagnose Klinefelter syndrome: