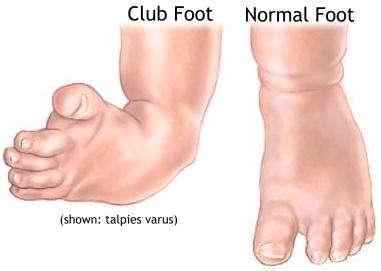 Also called congenital talipes equinovarus (CTEV), clubfoot is a congenital deformity involving one foot or both.The affected foot appears to have been rotated internally at the ankle.

It can range from mild to severe. Approximately, half of those affected by clubfoot develop it in both feet (a severe case).

Clubfoot itself can lead to the development of serious complications:

Although the underlying cause of clubfoot is yet unknown, Scientists link clubfoot to the position of fetus in the womb. This is also called postural clubfoot.
Other than this, Clubfoot is caused by a combination of genetic and environmental factors. However, the contribution of these factors to the cause is not yet fully understood.

Certain factors increase the risk of developing clubfoot. Such factors may include:

The only symptoms of clubfoot is the unusual appearance of the affected individual’s feet.

The characteristics of unusual appearance of the feet may include:

Clubfoot is usually diagnosed immediately after birth simply by looking at the foot.
The following tests may be conducted to study the extent or severity of clubfoot:

There are three methods which may help in treating clubfoot.