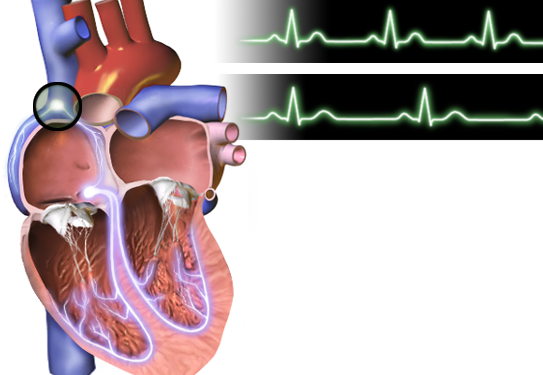 Bradycardia, also known as bradyarrhythmia, is a slow heart rate, namely, a resting heart rate of under 60 beats per minute (BPM) in adults. It is a type of cardiac arrhythmia.
For some people, a slow heart rate does not cause any problems. It can be a sign of being very fit.
In other people, bradycardia is a sign of a problem with the heart’s electrical system. It means that the heart’s natural pacemaker isn’t working right or that the electrical pathways of the heart are disrupted.
In severe forms of bradycardia, the heart beats so slowly that it doesn’t pump enough blood to meet the body’s needs. This can cause symptoms and can be life-threatening.
An implanted pacemaker and other treatments may correct bradycardia and help the heart in maintaining an appropriate rate.

Possible causes of bradycardia may include:

A diagnosis of bradycardia in adults is based on a heart rate less than 60 bpm. This is determined usually either via palpation or via an ECG.
If symptoms occur, a determination of electrolytes may be helpful in determining the underlying cause.

How bradycardia is treated depends on what is causing it. Treatment also depends on the symptoms. No treatment is required if no symptoms are exhibited.