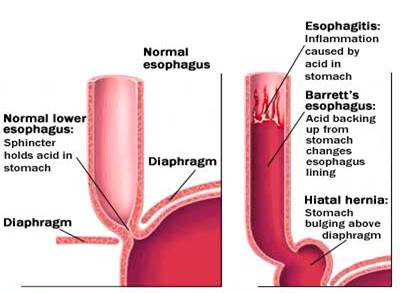 What Is Barrett’s Esophagus?

Barrett’s esophagus refers to an abnormal change (metaplasia) in the cells of the lower portion of the esophagus
It is characterized by the replacement of the normal stratified squamous epithelium lining of the esophagus by simple columnar epithelium with goblet cells (which are usually found lower in the gastrointestinal tract).

The cells of Barrett’s esophagus, after biopsy, are classified into four general categories:

High-grade dysplasia and early stages of adenocarcinoma can be treated by endoscopic resection and new endoscopic therapies such as radiofrequency ablation, whereas advanced stages (submucosal) are generally advised to undergo surgical treatment.
People with Barrett’s esophagus have an increased risk of esophageal cancer. The risk is small, especially in people whose lab tests show no precancerous changes (dysplasia) in their esophagus cells.

The following factors increase the probability of developing Barrett’s esophagus:

Risk of having Barrett’s esophagus is increased via:

    It is more common in older adults

Barrett’s esophagus is associated with the following symptoms:

Both macroscopic (from endoscopy) and microscopic positive findings are required to make a diagnosis.
Barrett’s esophagus is marked by the presence of columnar epithelia in the lower esophagus, replacing the normal squamous cell epithelium—an example of metaplasia.

All in all, the following procedures diagnose Barrett’s esophagus:

Treatment depends on the degree and severity of dysplasia.