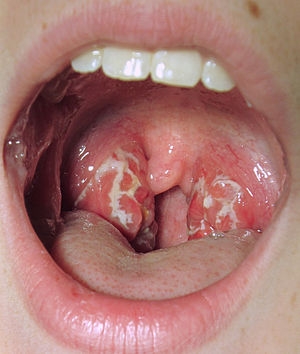 Tonsils are the two lymph nodes located on each side of the back of your throat. They function as a defence mechanism. They help prevent your body from infection. When the tonsils become infected, the condition is called tonsillitis.
Tonsillitis can occur at any age and is a common childhood infection. It is most often diagnosed in children from preschool age through their mid teens. Symptoms include a sore throat, swollen tonsils, and fever.

Most cases of tonsillitis are caused by a viral infection, such as the viruses that cause the common cold or flu virus (influenza).

Some cases can also be caused by a bacterial infection, typically a strain of bacteria called group a streptococcus bacteria.

These types of infections spread easily, so it’s important to try to avoid passing the infection on to others by:

There are several types of tonsillitis, and there are many possible symptoms that include:

Diagnosis is based on symptoms and physical examination of the throat.  In addition to directly inspecting your throat and tonsils, your GP may take a throat swab if streptococcus pyogenes infection is suspected. The throat swab is sent to a laboratory for culture and identification of the bacteria causing the tonsillitis.

Your GP many suspect glandular fever, which is caused by the Epstein-Barr virus, in a teenager or younger child with tonsillitis, particularly if accompanied by the additional symptoms of severe lethargy and tiredness, swollen glands in the neck, armpits and/or groin, and an enlarged spleen.

The first line of tonsillitis care can be conducted at home, and if the infection is viral rather than bacterial, antibiotics will not be prescribed.

These are the simplest tactics to reduce suffering at home:

Rest – during rest, your body can focus its energy on fighting the infection rather than expending it on daily activities.
Fluids – fluids prevent the throat from drying out and becoming more uncomfortable, warm liquids (preferably caffeine-free) can also soothe. When the body is fighting an infection, it needs more hydration than normal.
Saltwater – a saltwater gargle might help with discomfort.
Humidify – air humidifiers or sitting in a steamy bathroom can remove the irritation of dry air.
Avoid irritants – no smoking, avoid smoky locations.
Medication – pain and fever can be treated with ibuprofen or acetaminophen.

If bacterial infection has caused the tonsillitis, antibiotics are often prescribed. Penicillin is most commonly used. The full course of antibiotics must be taken, whether symptoms are relieved or not. Failure to do so might allow the infection to spread and has the potential to cause rheumatic fever or kidney inflammation in the long term.

Get Beautiful and Gorgeous Skin with Natural Vitamins for Skin