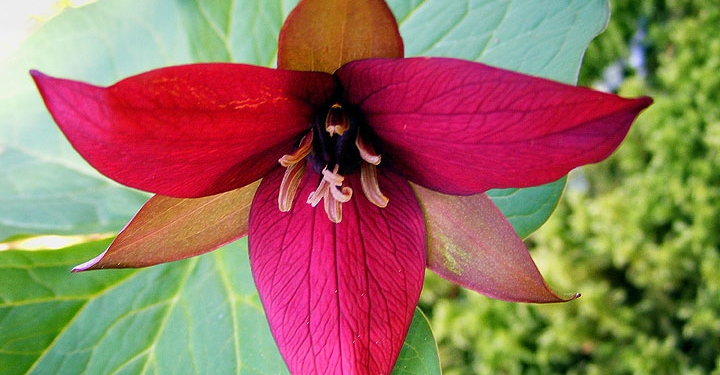 What is Red Trillium?

Red trillium is a perennial flowering plant that is known by many different names across the globe. Some of the most common names given to it are Beth root, wake robin, birth root, and Stinking Benjamin. This last name arises due to the pungent rotten meat like smell of its flowers. This plant has large, thick stalks and three pointed leaves, above which red or white flowers grow. Scientifically it is given the name Trillium erectum.

Red trillium has been used for its medicinal effects in the Northeastern region of the United States for generations. The underground rhizomes and leaves are the parts that are used medicinally. The leaves can be eaten as salad or cooked. The rhizomes can be boiled or powdered to produce a more concentrated form of the plants nutrients. The leaves and rhizomes can also be used to make topical concoctions that provide benefit to the skin.

•    It removes excess phlegm and mucus from the respiratory system. Since bacteria thrive in phlegm and mucus, its expectorant effect speeds up recovery from colds and prevents healthy individuals from acquiring diseases of the respiratory tract
•    It promotes menstruation and reduces painful and distressing symptoms related to it such as cramps
•    It can be used as a topical antiseptic to effectively sterilize wounds and abrasions
•    It kills parasites and dangerous bacteria inside the gastro intestinal system
•    It has been shown to reduce cancer tumor growth and metastatic rate
•    It can stimulate child birth and provide pain relief during the delivery process. This is the reason that one its common names is birth root. Care and caution needs to be practiced when using red trillium for this purpose as it can not only induce birth but can also harm pregnancy by inducing menstruation
•    When topically applied to bruises it can improve their appearance and reduce inflammation caused by them
•    It can cure and upset stomach and diarrhea

2000 Calorie Diet Meal Plan Which Can Improve Your Health

2000 Calorie Diet Meal Plan Which Can Improve Your Health