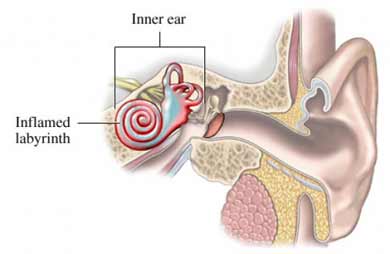 Labyrinthitis is usually caused by a virus and sometimes by bacteria. Having a cold or flu can trigger the condition. Less often, an ear infection may lead to Labyrinthitis. Other causes include allergies or certain drugs that are bad for the inner ear. These factors causes Labyrinthitis is as follows:

Symptoms of Labyrinthitis may include any of the following:

Diagnosis of Labyrinthitis carry out the following tests:

Further testing is usually only required if you have additional symptoms that suggest you may have a more serious condition, such as meningitis or a stroke. Symptoms can include:

These tests can include:

The treatment options for Labyrinthitis available are:

In addition to taking medications, there are several techniques you can use to relieve vertigo: