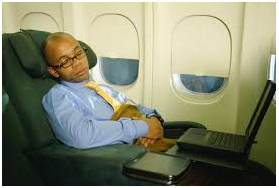 What Is Jet Lag Disorder ?

Medically known as desynchronosis, Jet lag disorder is a physiological condition which tends to occur due to the alterations to the body’s circadian rhythm.

Circadian rhythm is a term used for any biological process that displays an endogenous oscillation of 24 hours. It tends to include the sleep cycle, appetite, digestion etc.

The symptoms associated with jet lag disorder may persist for a few days and may disappear as the body adapts to the changes in time zone.

Although a temporary problem, jet lag may lead to reduction of leisure time and business travel comfort. However, it can be minimized and avoided.

The underlying cause of jetlag disorder can be traced back to three major factors. These include the following:

In order to relieve symptoms associated with jet lag, the following treatment options are available:

Jet lag can be prevented if the following steps are undertaken: