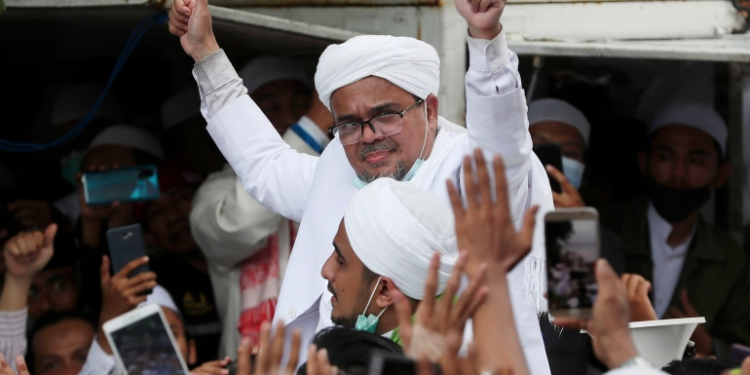 Court jails hardline leader of a banned religious group for claiming he was healthy despite testing positive for COVID-19.

An Indonesian court has sentenced hardline religious leader Rizieq Shihab to another four years in prison on charges of spreading false information about the results of his COVID-19 test.

The verdict on Thursday comes after the same court handed Rizieq, leader of the banned Islamic Defender’s Front (FPI), an eight-month jail term in May for breaching coronavirus curbs during several mass events, including his daughter’s wedding, which was attended by thousands of people.

Prosecutors had called for a six-year sentence in the latest case.

Rizieq was charged with spreading false information after he posted a video on YouTube claiming he was healthy despite having tested positive for COVID-19. At the time, the 55-year-old was being treated at the Ummi Hospital in Bogor, a city just outside the Indonesian capital, Jakarta.

Prosecutors said Rizieq’s false statement that he was healthy, which was aired by several news networks and widely spread on social media, put the community at risk, considering that he had attended several events involving thousands of people.

Indonesia passed the 2 million mark in coronavirus cases on Monday, as authorities announced a tightening of restrictions to contain the spread in the world’s fourth-most populous country. Deaths from COVID-19 now total 55,594.

Delivering Thursday’s verdict, Judge Khadwanto said Rizieq was guilty of “announcing false information and purposefully causing confusion for the public”. The judge also ordered the time he has already served to be deducted from his sentence.

Shortly afterwards, the religious leader told the court he rejected its ruling and would contest it.

Rizieq has been detained since December 13.

The court also sentenced Rizieq’s son-in-law, Hanif Alatas, to two years imprisonment for being an accessory to the crime.

Prior to the sentencing, hundreds of Rizieq’s supporters had gathered outside the East Jakarta Court. Police later fired tear gas and water cannons to disperse followers who tried to approach the court.

Hundreds who refused to leave were detained.

Rizieq’s supporters and legal team have said the cases are politically motivated efforts to silence the religious leader, who has a large and vocal following in the world’s biggest Muslim-majority country.

He returned last year from self-imposed exile in Saudi Arabia, where he had fled while facing charges of pornography and insulting the state ideology, both of which were later dropped.

Since returning, he has called for a “moral revolution” in Indonesia, fueling tensions with the government.

The government banned FPI in December, saying it had no legal grounds to operate as a civil organisation and that its activities often violated the law and caused public disorder.

Yoga Poses for Upper Back Pain