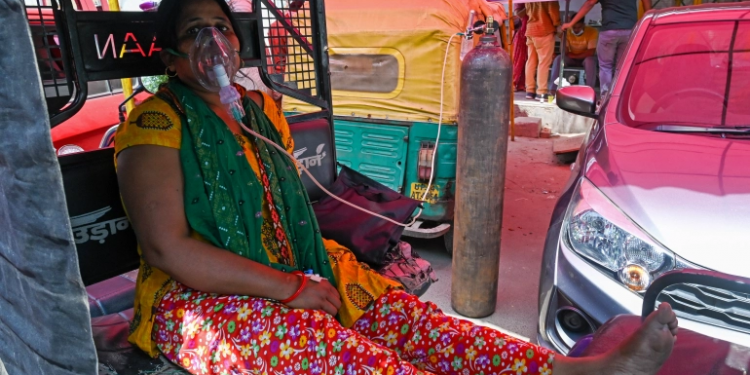 Gurdwaras in and around New Delhi have arranged ‘oxygen langar’ to provide free oxygen to patients who need it.

An acute shortage of medical oxygen has worsened India’s ferocious second wave of the coronavirus, with hospitals forced to turn patients back as families scramble to arrange oxygen cylinders for their loved ones being treated at home.

Indian social media is replete with accounts of people dying for lack of oxygen, which is being sold at humongous prices in black markets where a cylinder is being sold at as much as 30 times its actual cost.
In such a scenario, at least two gurdwaras or Sikh temples in and around the capital, New Delhi, have arranged an “oxygen langar” to provide free oxygen to the COVID-19 patients who need it.

Oxygen therapy is crucial for severe coronavirus patients with hypoxaemia when oxygen levels in the blood are too low.

A gurdwara in the Greater Kailash neighbourhood of the Indian capital is offering a free refill of oxygen cylinders, Indian media reports said.

Another gurdwara in Ghaziabad on the outskirts of New Delhi has set up a facility within premises where about 80 people can take oxygen at a time.

The gurdwaras have also set up helplines for people in need of oxygen and other medical emergencies.

Sikh temples in the city and other parts of India have also made arrangements for free home delivery of food for COVID-19 infected people.

India on Friday posted another record daily rise in coronavirus cases, with 386,452 new infections while deaths from COVID-19 jumped by 3,498 over the last 24 hours, according to health ministry data.

However, medical experts believe actual COVID-19 numbers in the world’s second-most populous nation may be five to 10 times greater than the official tally.

India’s severe medical oxygen supply crisis is expected to ease by mid-May, a top industry executive told Reuters news agency, with output rising by 25 percent and transport infrastructure ready to cope with a surge in demand.

A worker died and at least two were injured after an oxygen cylinder exploded during refilling at Panki Oxygen refilling plant in Kanpur in India’s northern state of Uttar Pradesh earlier on Friday, local police told Reuters.

The incident comes a week after at least 22 patients died at a public hospital in India’s western Maharashtra state when their oxygen supply ran out after a leak in the tank.

Meanwhile, global aid has started arriving in India as it struggles to combat what has been described as a humanitarian disaster.

The latest Fashion Trend in Pakistan

8 Refreshing Drinks That You Can Try in Ramadan

8 Refreshing Drinks That You Can Try in Ramadan