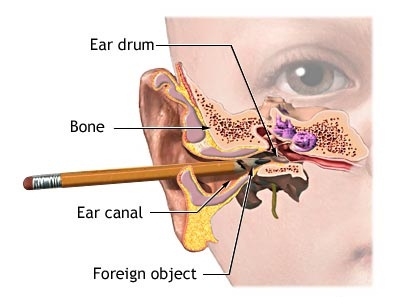 What Is Earwax Blockage?

Earwax blockage occurs when earwax, or cerumen, accumulates in the ear. Such blockage leads to difficulty in naturally washing away the earwax.
Earwax is produced by glands in the ear canal. . Usually, the wax dries up and falls out of the ear, along with any trapped debris. Smaller shaped ear canals may make it difficult for the naturally occurring wax to get out of the canal and lead to wax impactions.
Such accumulation may occur when too much earwax is produced or when the existing wax pushes too far into the ear canal.
Since earwax is a natural element of the body’s defense system and helps in lubricating and protecting the ear canal, earwax blockage may lead to development of further complications if not treated.
Symptoms may persist until the excess earwax is removed. Generally, home remedies are successful in treating earwax blockage. However, in case of severe pain and persisting symptoms, medical intervention may be required.

Earwax blockage may occur when the wax either gets accumulated in the ear or when it gets pushed deep within the ear canal.

Some common causes of ear blockage may include:

Factors that can increase the risk of excess earwax accumulation:

The following signs and symptoms may be exhibited by those who suffer from earwax blockage:

Diagnoses of ear blockage may be made via examination by an ENT specialist. Such examination may be done with a special instrument that lights and magnifies the inner ear (otoscope).

Earwax blockage may be treated via: