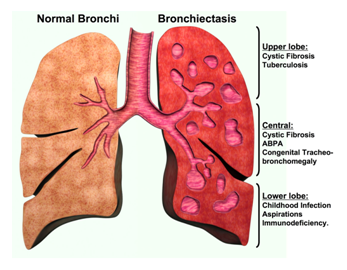 Bronchiectasis is a condition where the bronchial tubes of your lungs are permanently damaged and enlarged. These damaged air passages let bacteria and mucus to build up in your lungs. This results in infections and blockages in the airways

Conditions that damage the airways and raise the risk of lung infections also can lead to Bronchiectasis. Examples of such conditions include:

Other conditions, such as

Symptoms of Bronchiectasis can take months or even years to develop. Here are some of the symptoms:

Early diagnosis and treatment of the underlying cause of Bronchiectasis may help prevent further lung damage. In addition, any disease associated with the Bronchiectasis, such as cystic fibrosis or immunodeficiency, also should be treated.

Some people find CPT hard or uncomfortable to do. Several devices can help with CPT, such as:

Bronchiectasis is a chronic condition with repeated exacerbations that can develop slowly over a few weeks or rapidly over a few days. It is important to incorporate self-care strategies into daily life, including taking oral and inhaled medications, performing mucus clearance techniques, and getting plenty of rest.