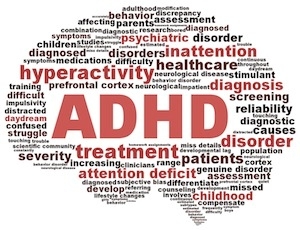 Attention Deficit Hyperactivity Disorder is a neuro developmental psychiatric disorder in which there are significant problems with executive that cause attention deficits, hyperactivity, or impulsiveness which is not appropriate for a person’s age.

The definite cause of ADHD is yet unknown.

However, researchers claim that it is a result of interaction between genetic and environmental factors.

The following factors are loosely linked to ADHD.

The following factors increase the likelihood of getting ADHD:

Those suffering from ADHD may exhibit the following symptoms:

There is no specific test for the diagnosis of ADHD.

However, the procedure for making a diagnosis may include the following:

There is no treatment available which can cure ADHD. However, treatments can help relieve most of the symptoms.