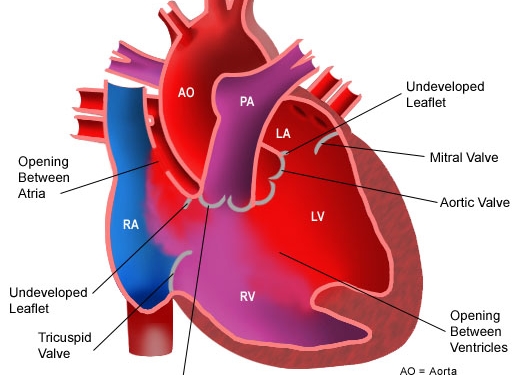 What Is Atrioventricular Canal Defect?

Atrioventricular canal defect is a combination of heart problems resulting in a defect in the center of the heart.
The condition occurs when there’s a hole between the heart’s chambers and problems with the valves that regulate blood flow in the heart.
It is caused by an abnormal or inadequate fusion of the superior and inferior endocardial cushions with the mid portion of the atrial septum and the muscular portion of the ventricular septum

Complications of atrioventricular canal defect can include:

The following tests are conducted in order to diagnose atrioventricular canal defect:

Surgery is needed to repair complete and partial atrioventricular canal defects. The procedure involves closing the hole in the septum with one or two patches. The patches stay in the heart permanently, becoming part of the septum as the heart’s lining grows over them.
Infants born with AVSD are generally in sufficient health to not require immediate corrective surgery. If surgery is not required immediately after birth, the newborn will be closely monitored for the next several months, and the operation held-off until the first signs of lung distress or heart failure.