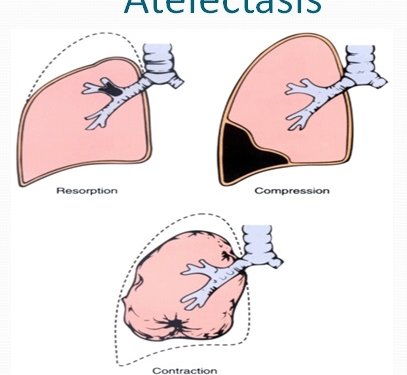 Atelectasis is defined as the collapse or closure of the lung resulting in reduced or absent gas exchange.

It may affect part or all of one lung. It is a condition where the alveoli are deflated, as distinct from pulmonary consolidation.

The amount of lung tissue involved in Atelectasis is variable, depending on the cause. Atelectasis can make breathing difficult and lower oxygen particularly if lung disease is already present.

Treatment depends on the cause and severity of the collapse.

Atelectasis may be the result of a blocked airway (obstructive) or of pressure from outside the lung (nonobstructive).

Obstructive atelectasis may be caused by:

Accumulation of mucus in the airways, often occurring during and after surgery because one can’t cough, is a common cause of Atelectasis.

Atelectasis is common in children who have inhaled an object, such as a peanut or small toy part, into their lungs.

Can scar and constrict major airways.

An abnormal growth can narrow the airway.

This occurs only if there’s significant bleeding into the lungs that can’t be coughed out.

Possible causes of nonobstructive Atelectasis include:

Chest trauma can cause one to avoid taking deep breaths (due to the pain), which can result in compression of your lungs.

This is a buildup of fluid between the tissues (pleura) that line the lungs and the inside of the chest wall.

Different types of pneumonia may temporarily cause atelectasis.

Air leaks into the space between the lungs and chest wall, indirectly causing some or all of a lung to collapse.

Scarring could be caused by injury, lung disease or surgery.

A large tumor can press against and deflate the lung, as opposed to blocking the air passages.

The following tests confirm the diagnosis:

Food to Eat In Kosher Diet and Its Importance