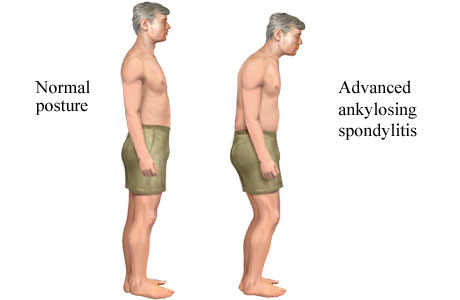 What Is Ankylosing Spondylitis?

Ankylosing spondylitis, previously known as Bekhterev’s disease and Marie-Strümpell disease, is a chronic inflammatory disease of the axial skeleton, with variable involvement of peripheral joints and nonarticular structures.
The spine’s bones (vertebrae) may grow or fuse together, resulting in a rigid spine. These changes may be mild or severe, and may lead to a stooped-over posture.
Early diagnosis and treatment helps control pain and stiffness and may reduce or prevent significant deformity.
Ankylosing spondylitis affects men more often than women. Signs and symptoms of ankylosing spondylitis typically begin in early adulthood. Inflammation also can occur in other parts of the body — most commonly, eyes.
There is no cure for ankylosing spondylitis, but treatments can relieve pain and lessen symptoms.
Complications may include:

The most common early symptoms of ankylosing spondylitis include:

Ankylosing spondylitis can be diagnosed via:

There is no cure for ankylosing spondylitis.
However, treatment may provide relieve against pain and other symptoms.