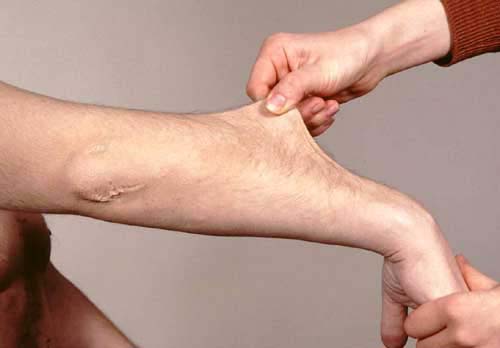 What Is Ehlers-Danlos Syndrome?

Ehlers-Darlos syndrome is an inherited connective tissue disorder with presentation which has been classified into several types. It mainly affects skin, joints and blood vessel walls.
Usually caused by a defect in the structure or processing of collagen, Ehlers-Danlos syndrome is incurable.
Due to general poor knowledge about Ehlers-Danlos syndrome, people affected by it are often misdiagnosed with other conditions, which may include hypochondriasis, depression or chronic fatigue syndrome.
Ehlers-Danlos syndrome leads to development of overly flexibly joints and fragile fingers. Many sufferers of Ehlers-Danlos Syndrome have psychological difficulties as a result of frustration with the medical system and the socially inconvenient combination of appearing normal while being in severe pain.
To deal with these issues, interest groups have tried to raise awareness about it among medical professionals. Because one can appear healthy despite developing it, therefore it is considered an invisible disability.

There are various types of Ehlers-Danlos syndrome. These have been positively identified to be linked to specific genetic variation.

Mutations in the following genes can cause subtypes of the Ehlers–Danlos syndrome:

Mutations in the above mentioned genes usually alter the structure, production, or processing of collagen or proteins that interact with collagen. A defect in collagen can weaken connective tissue in the skin, bones, blood vessels, and organs, resulting in the development of symptoms.
Inheritance patterns depend on the type of Ehlers–Danlos syndrome. Most variations of the condition are inherited in an autosomal dominant pattern, which means only one of the two copies of the gene in question must be altered to cause it.

The following signs and symptoms may be exhibited:

Ehlers-Danlos syndrome may be diagnosed via:

Ehlers-Danlos is not curable. However, supportive treatment is available: