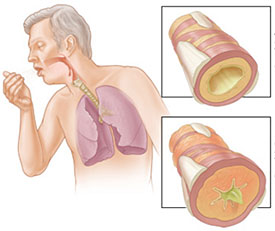 What is Chronic Obstructive Pulmonary Disease?

Also known as chronic obstructive lung disease, chronic obstructive pulmonary disease or COPD is a type of obstructive lung disease characterized by poor air flow. It generally worsens over time.
Those suffering from chronic bronchitis may also suffer from COPD. The diagnosis of COPD is based on poor airflow as measured by lung function tests. In contrast to asthma, the airflow reduction does not improve significantly with the administration of a bronchodilator.
COPD is treatable. With proper management, most people with COPD can achieve good symptom control and quality of life, as well as reduced risk of other associated conditions.
COPD can be prevented by reducing exposure to known environmental risk factors. This includes decreasing rates of smoking and improving indoor and outdoor air quality

The primary cause of Chronic Obstructive Pulmonary Disease is tobacco smoking, with occupational exposure and pollution from indoor fires being significant causes in some countries (especially developing countries).

Symptoms of Chronic Obstructive Pulmonary Disease occur after the condition has already worsened.

The following diagnostic tests are conducted: