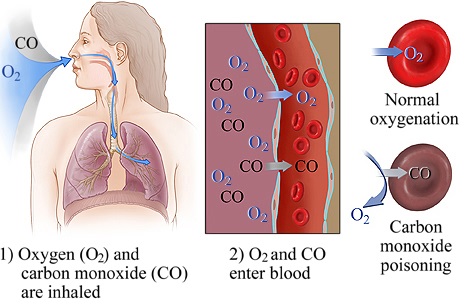 What Is Carbon Monoxide Poisoning?

Carbon monoxide is a toxic gas, but, being colorless, odorless, tasteless, and initially non-irritating, it is very difficult for people to detect.

When too much carbon monoxide is in the air, the body replaces the oxygen in one’s red blood cells with carbon monoxide. This can lead to serious tissue damage, or even death.

Exposure to carbon monoxide may be particularly dangerous for:

Young children take breaths more frequently than adults do, which may make them more susceptible to carbon monoxide poisoning.

Sources of carbon monoxide include:

The following signs and symptoms are exhibited by those suffering from carbon monoxide poisoning:

Carbon monoxide poisoning can be diagnosed via the following procedures: