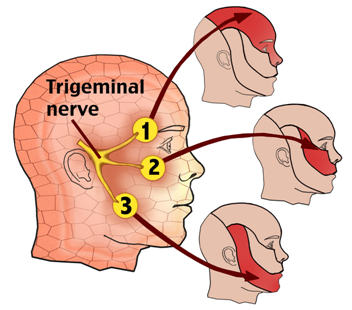 What is Trigeminal Neuralgia?

Trigeminal Neuralgia (TN) is a chronic pain condition that affects the trigeminal or 5th cranial nerve, one of the most widely distributed nerves in the head. TN is a form of neuropathic pain (pain associated with nerve injury or nerve lesion.) The typical or “classic” form of the disorder (called “Type 1” or TN1) causes extreme, sporadic, sudden burning or shock-like facial pain that lasts anywhere from a few seconds to as long as two minutes per episode.  These attacks can occur in quick succession, in volleys lasting as long as two hours.  The “atypical” form of the disorder (called “Type 2” or TN2), is characterized by constant aching, burning, stabbing pain of somewhat lower intensity than Type 1.  Both forms of pain may occur in the same person, sometimes at the same time. The intensity of pain can be physically and mentally incapacitating.

A variety of triggers may set off the pain of trigeminal neuralgia, including:

Trigeminal Neuralgia can be diagnosed, mainly based on the description of the pain, including:

Many tests to diagnose trigeminal neuralgia and determine underlying causes for the condition, including: