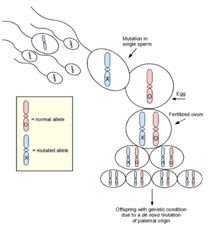 People with Swyer’s syndrome have typical female external genitalia. The uterus and the fallopian tubes are usually formed, but the gonads (ovaries or testes) are not functional; Affected individuals have undeveloped clumps of tissue called Streak-gonads. Due to the lack of development of the gonads, Swyer’s syndrome is also called 46, XY complete gonadal dysgenesis. The remaining gonad tissue is often cancerous, so that it is usually surgically removed early in life.

In most cases of Swyer syndrome the exact cause of the disease is unknown. Researchers believe that disorders or changes (mutations) of a gene or genes involved in normal sex differentiation of a fetus with an XY chromosomal makeup cause Swyer’s syndrome.